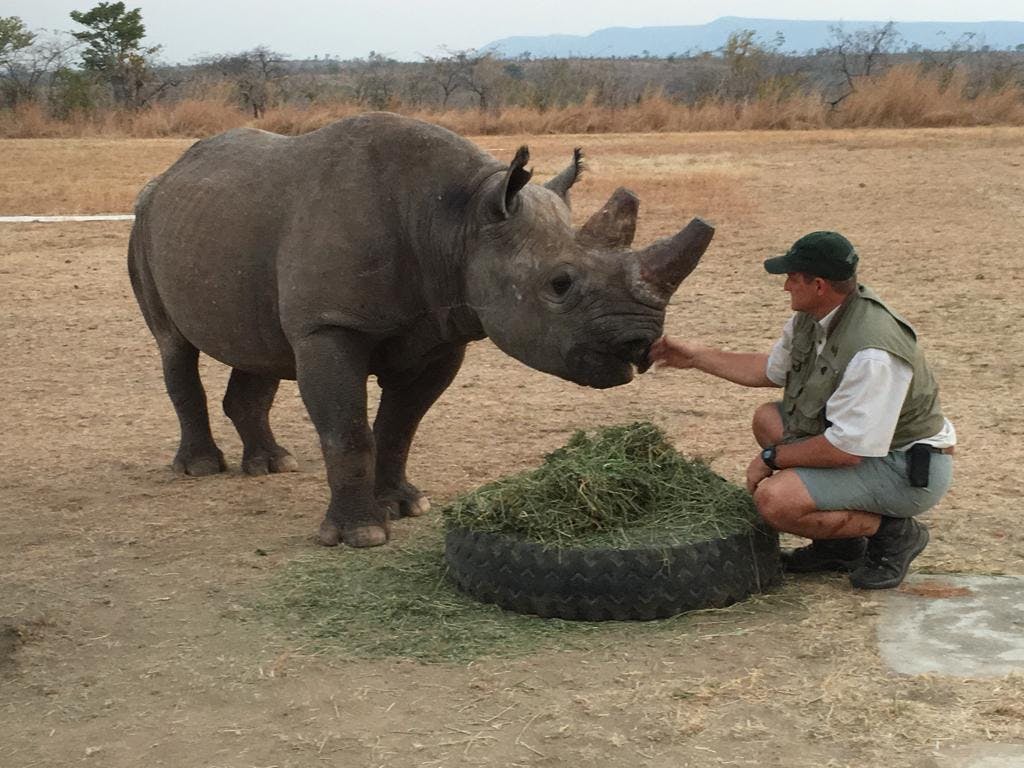 Meet the Director of the Rhino Recovery Fund

By Markus Hofmeyr, Director of the Rhino Recovery Fund

My name is Markus Hofmeyr, and I'm honored to be at the helm of the Rhino Recovery Fund. It's my hope that this introduction and look back at my career in wildlife conservation, specifically rhino conservation, will illustrate just how important this remarkable species is to me and how we can help fellow conservationists make great strides in rhino recovery.

Since a young age, I have been interested in wildlife and conservation. I started my conservation career with bird ringing and bird checklists in various parks whilst at school in South Africa. During all of my holidays, I worked in wildlife reserves. I completed my undergraduate degree as a veterinarian at the Veterinary Faculty of Onderstepoort at the University of Pretoria in 1994. After graduating, I worked as an exotic animal veterinarian at the University of Pretoria, taking care of birds, reptiles, and other wild animals. I also spent a few months in Canada volunteering in their national parks systems and veterinary practices.

In 1995, I joined the North West Parks and Tourism Board in South Africa as a veterinarian and field ecologist for Madikwe Game Reserve. In the 5 years I worked there, I was part of the reserve development team and, with the team, oversaw the largest introduction of African mammals back into their former range – 27 large mammal species and over 8,200 animals, including both black and white rhinos and key predator species. As part of the development team, we also pioneered the first successful reintroduction technique of African wild dogs into fenced parks.

From there I moved to Kruger National Park at the end of 1999, where I was employed as a junior veterinarian and eventually rose through the ranks to become the head of the Veterinary Wildlife Services Department for South African National Parks (SANParks) in 2003. This position exposed me to senior management, conservation strategy, and all of the aspects of wildlife veterinary science found in a conservation organization. Regional conservation work was part of the portfolio, as well as international support for conservation projects. At this time, I started becoming involved in greater one-horned rhino conservation and training veterinarians to rescue Sumatran rhino in Indonesia.

After my time at SANParks I moved to Botswana, where I was appointed as the Chief Conservation Officer for Great Plains Conservation. This involved overseeing the Botswana component of the Rhino Without Borders rhino translocation to the Okavango Delta. We successfully moved 87 rhinos from South Africa to the delta, which increased the population dramatically in that area.

From Botswana I moved to the Oak Foundation as a program officer in the Wildlife Conservation & Trade (WCT) program. Currently I still hold this position, and will remain with them until the strategy is formulated and I play a dual role as the Director of the Rhino Recovery Fund and developing the conservation strategy in the Oak Foundation WCT program.

I have been working with rhinos since my days as a student. This amazing species has been a constant thread throughout my conservation career, and I feel integrally connected to these magnificent animals. I am beyond excited to lead the Rhino Recovery Fund forward and help effective organizations around the world protect rhinos and their habitats.